WELCOME TO AOTEA HARBOUR - AOTEAROA ~ NEW ZEALAND
Conservation resources and threats
Aotea Harbour is of high conservation value for both natural and historical reasons.Aotea Harbour meets the 'Ramsar' criteria for 'wetlands of international importance'.
Aotea Harbour is of great cultural and historical significance to our people who come from the area.
Threats to the harbour include siltation (caused by erosion of catchments), pollution (eg sewerage, argricultural run-off of chemicals), overfishing and spread of weed species such as spartina.
The coast and dune system of the Aotea Sand Spit is rated as nationally important and is protected by reserve status.
A significant portion of the northern catchment of Aotea Harbour includes Maori and privately owned native forest. The forests on the Aotea Harbour catchment is especially important for protection of water quality in Aotea Harbour.

Conservation Issues
Presence of introduced animals, especially of goats and possums, which are threatening native ecosystems and species.
Siltation and pollution entering the three harbours as a consequence of land management practices within their catchments.
Deterioration of harbour wetland and aquatic habitats.
Pressure on scenic and recreation areas as a result of proximity to urban Waikato.
Deterioration/destruction of dune structures and habitats as a consequence of dune stabilisation plantation forestry and replacement of native vegetation by exotics.
Commercial fishing in Aotea Harbour.
Spread of weeds, especially spartina, in the harbour

PROTECTING NATIVE BUSH
Native bush habitat within the Aotea Harbour must maintain a balance to ensure that there is enough coverage and protection for bird life, native insects and land stabilisation. It will also ensure there is an abundant supply of rongoa Māori. These taongas must be protected.
Known locations will be catalogued, identifying hazardous areas, and replanting programmes planned to ensure ongoing regeneration and conservation.
Pests, such as possums and goats, which create a lot of damage in the native bush, will be controlled through culling, rounding up, bait stations, and traps. This will be an ongoing project.
Any tree which is needed for fencing, building or carving purposes should be replaced by a seedling of the same variety to ensure that efficient numbers are maintained.
The marae and the Department of Conservation have established an ongoing native species regeneration programme to encourage local participation in replanting affected areas. Kaitiaki or a kaumātua must be contacted if any taonga or historical artefact is found. 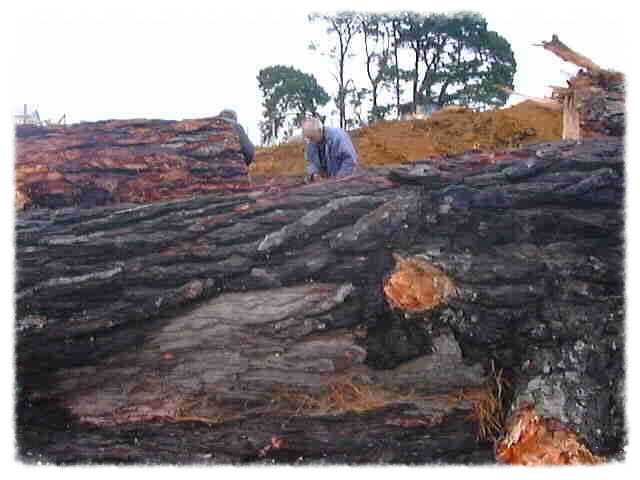 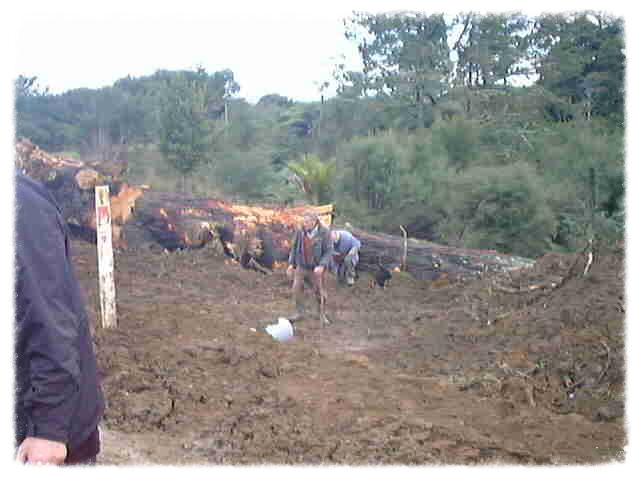 Council stumbles into cultural minefield
Waikato Times, Tuesday, February 12, 2002
Guardian's Angel: Okapu kaitiaki Davis Apiti wants to Otorohanga District Council to pay for milling this fallen cedar, planted by King Tawhiao.
The Otorohanga District Council (ODC) has unwittingly blundered into a cultural stoush with Kawhia Maori after a tree planted by Tawhiao, the second Maori king, was felled as part of its $2 million Raglan-Kawhia road upgrade.
The tree, estimated to be about 150 years old, was felled by contractors in August and Maori from Okapu Marae now want the council to pay to have it moved on to kaumātua John Apiti's nearby farm so it can be milled and the timber used.
Okapu kaitiaki (guardian) Davis Apiti said while he had initially agreed with a council offer of $1500 to cover costs of recovering the tree, "after further thought, we came to the conclusion that they made the mistake and they should put it right." He expects the total cost of moving and milling the tree to be about $5000.
The council has apologised for felling the tree but claims it is an "innocent party".
It would "certainly not have felled it had it been aware that the tree had cultural significance," council engineering manager Ian Gooden said.

John Apiti said the tree was one of many planted by Tawhiao during his frequent travels in the area.
"He had a place there and planted a lot of little fruit trees as well," John Apiti said.
Davis Apiti said while Māori were "really happy" with the work being done on the winding dirt road, the level of consultation by the council had left a lot to be desired.
Okapu Marae was left out of the iwi consultation process.
"If they had consulted properly, this would not have happened," he said.
Mr Apiti was hopeful the dispute could be resolved, but if not, "when they come back next time, we won't be so welcoming".
Council general manager David Hall said there had been several meetings with Kāwhia Māori to resolve the issue and it was possible council could be asked to fund the full amount of recovery.

He was confident the issue would not sour its relationship with Kāwhia Māo
ri.
-Tracey Cooper
Waitomo News, Thursday, August 31, 2000
Aotea Maori are wanting the Otorohanga District Council to pay the cost of transporting the felled Tawhiao tree to the area's marae.

However, they will have a battle convincing the council to do this. Although the ODC has acknowledged its Raglan-Kawhia Rd works' contractors cut the tree down, the council's position is it undertook extensive consultation and weren't told about the tree's significance. There is shouldn't be liable.

Okapu kaitiaki Davis Apiti said the council spoke to the wrong people during their consultation process, and it should pay for the iwi's transportation plans.

He said they had arranged for a portable mill to be set up near the tree next week. The mill would cut the tree into tansportable pieces for delivery to the various Aotea Harbour marae, Kawhia marae and Kawhia School.

Kawhia Aotea marae consider the tree sacred as it was planted over 100 years ago by King Tawhiao.

It has already been cut into several sections, but currently remains too big to move. The main section is about 12 metres long and weighs around 14 tonnes.
The following letter is from the Otorohanga District Council after discussions about the future of Tawhiao's Tree.
Dear Sir


Thank you for your phone call of 15 September 2000. I agree that we must work together to resolve this unfortunate incident so that we can move forward in harmony.


Your suggestion of an on-site meeting is a fine way to resolve some of the outstanding issues between us and we would be happy to attend. As discussed, the most convenient time and date is 10.30am on the 28th of September 2000. We anticipate that Cr. Fiona Scott, Mr Alan Rubay (Kawhia Community Board Chairman), Mr Ian Gooden (Engineering Manager) and Mr Hugh Button (Roading Asset Engineer) will be in attendance.


If you have any further concerns please do not hesitate to contact me.
Yours faithfully
D R Hall
GENERAL MANAGER

Send us your pledge of support or contact us below:
Thank you!

Maui's Dolphin
Birds of Aotea
↑Back to Top